Now, suppose motorcycle batteries do not charge while riding; bikers would go around with battery chargers as people travel with adapters. A typical motorcycle today features an alternator like a car, while older models feature DC (Direct Current) generators. Older electric starter motorcycles also had DC generators functioning as the starter motor. So, any DC motor could function as a dynamo.

Does a Motorcycle Battery Charge While Riding?

The magnet and wire coils generate the AC, which the rectifier converts to DC that the motorcycle battery uses while riding. Meanwhile, the regulator can determine the level of current the motorcycle receives constantly.

The alternator of a car contains the regulator/rectifier and is often driven by a belt. An alternator in a car looks like what you have below:

The regulator is quite large in cars and spins through mechanical measures like gear, shaft, or belt.

Below is what the regulator looks like in a car. You can see that the size is too big to fit into many motorcycles.

A motorcycle engine uses wire coils and magnets known as stators, and one of both spins with the aid of the crankshaft.

Below is a motorcycle stator beneath the engine cover:

The regulator/rectifier on a motorcycle sits around the cooling air stream to calm the temperature.

How Long Does It Take to Charge a Motorcycle Battery While Riding?

You must ride a motorcycle at up to 3,000 cruising RPM to charge the battery. The motorcycle battery has to recover between 13.5 and 14.5 volts to charge while you are riding. I.e., you would have to ride the motorcycle for an extended period, typically two hours, for a reliable battery charge.

As listed above, the bike running speed and battery size factors in the time the battery takes to charge. The faster the riding speed, the higher the RPMs, which increases the alternator charging speed. Moreover, if your motorcycle battery is large, it will take longer to charge to a decent level.

Meanwhile, ensure to turn off motorcycle accessories for the alternator to get all the RPM power to increase charging speed. You may disable the radio, headlight, and any active accessory to prevent the charging process from slowing down while riding. Note that if you use typical aftermarket motorcycle detail lights, it drains the battery and slows the charge.

What You Should Know About a Motorcycle Battery Charging While Running

A typical motorcycle runs on a battery, which provides power for starting the motorcycle and buffering electrical energy. The motorcycle battery is charged by a generator powered by the engine, and current flows through it whenever you ride the motorcycle in the rain, snow, wind, or whatever condition.

You would typically find the generator within the engine compartment, and some motorcycles have a separate unit on the frame. The reason is that most motorbikes use a three-phase AC generator while the electrical system is a DC system.

The regulator of the regulator/rectifier regulates the output voltage to the required 14.4 VDC (Volts Direct Current).

Some small bikes have no battery but have generators. So, a small alternator produces the electrical power for lights and ignition. Such bikes have no electric starters, and you must kick start them to fire the engine.

In essence, a motorcycle uses an alternator that powers the battery when the engine is running. It means that while riding, your battery charges, but the charging speed is factored by your speed, revs, additional active accessories, and riding duration.

The best option is to charge your battery with a charger. However, if you have a dead battery with no charging alternative, you can bump start or push start the motorcycle downhill. 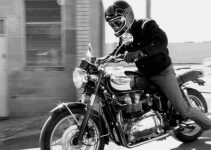 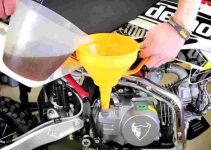