Home
Motorcycles
Rider Education
How to Push Start a Motorcycle

Depending on the motorcycle, you may be able to push and start. So, this article discloses how to push start a motorcycle even with a dead battery.

Not all motorcycles can be push-started. So, you’d want to consult the user’s manual to confirm whether your manufacturer recommends push starting.

You’d be fortunate if you can push start a motorcycle, but you must not make it a habit to fire your engine in this manner.

Is it bad to push start a motorcycle?

It is not entirely bad, but not okay to push start a motorcycle often. If you push to start the motorbike properly without compromising the clutch and transmission, it is OK. Also, the motorcycle condition must be good for push starting to be effective.

Push starting is not an advisable way to start or fire your motorcycle engine. This practice is best for emergencies and must not be repetitive whenever a biker is starting a motorcycle. Continuous push starting can damage the gearbox, which costs twice the amount of your kick starter repairs.

When your motorcycle is unresponsive to a push start, consult the mechanic. Meanwhile, fuel-injected motorcycles are not push-starting friendly.

How to Push Start a Motorcycle

Locate a slope or hilly surface; it adds speed and makes pushing the motorcycle easier. You can achieve up to 5mph faster when running down a hill.

Since someone would be pushing the motorcycle, sit on it.

Now, put the motorcycle in the second gear. Pull the throttle and set the gas moving.

Hold your clutch lever and push the motorcycle to a pace you can manage safely to avoid a crash.

When the motorcycle is running fast enough, release or drop the clutch quickly. When rolling, the released clutch allows momentum while the engine/gear drags your motorcycle to fire the engine. Make sure to throttle to keep the engine running.

How to Push Start a Motorcycle by Yourself

You’d have to stand next to your motorcycle when push starting it alone.

Next, run the motorbike at about 10kmph speed and release the clutch quickly.

Now, hold the clutch lever and maintain a decent pace.

You would jump on the side saddle on the seat while dropping the clutch to avoid crashing when you run the motorcycle at a reliable speed.

The force should bump the engine to fire while you throttle to keep it running.

Can You Push Start a Motorcycle Without Key?

Yes, you can push start a motorcycle without a key, but you must locate the wire connected to the ignition. The wire typically goes to the battery, though. You’d find the plug near the headlight between the ignition key and battery.

It is better to find a slope or downhill whether you are pushing the motorcycle with someone or yourself.

Your motorcycle may always require a push start, especially on a low-temperature morning. Make sure not to push start your bike often, and do not push it on a major road with many moving vehicles. 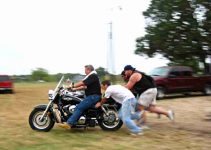 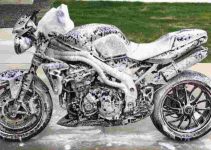 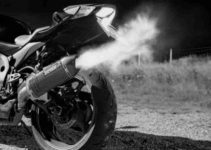