Home
Motorcycles
How Easy is It to Steal a Motorcycle?

I’m a victim of motorcycle theft, but it dawned on me how easy it could happen after the dirt bike I recovered from the impound was stolen.

I rode a KLX250 and dumped it some time ago on the way home from work. When I put it on the kickstand in the middle of the highway turnaround, three guys that stopped to help were next to me.

One tells me to go to the curb, and I walk over there. I give myself a quick check, turned around, and my motorcycle is no more. I was dumbfounded, though, and the motorcycle has gone!

Can motorcycles be stolen easily?

Yes. If you want a motorbike so bad, you can steal it easily. Suppose you’re reading this article to secure your motorcycle; it is one grab away from you. Do you reside in London? A motorcycle is already stolen before signing the paperwork. In the US? A motorcycle is as good as stolen; the few days of riding is a mere grace period.

Read: Can you get a license with no motorcycle?

How Easy is It to Steal a Motorcycle?

It is very easy to steal a motorcycle. Dad had a GSXR 750cc that was stolen twice. The motorcycle was always locked. It had a padlock, alarm, locked handlebars, and chained to solid objects. Thieves still took off the locks with pair of clippers. Motorcycle locks merely keep an honest thief away.

Out of anger, no more locks on the motorcycle. For 10 years outside the house, nobody touched it, and it’s still in the warehouse collecting dust.

The point is that riders can’t do much to protect their motorcycles. The best practice is for a rider to install a tracker and a hidden kill switch like in dad’s GSXR 750cc. Yes, the stolen bike was tracked and recovered because the previous owner installed a hidden kill switch that kills the electric when the motorcycle gets stolen.

A motorbike is not too heavy; a buddy and I lifted an EX500 into the bed of a truck within 30 seconds.

Once at a dealership, 3 guys put a 700 pound Softail in the truck and did not put a bagger in the bed of the truck. To put the motorcycle in the truck, two will stand at either side of the truck, and the third person becomes additional support. Lift the handlebars first put to the front wheel on the tailgate, then swing arm to lift the rear. Roll it forward while tilting from side to side to control the front wheel.

If you can support the motorcycle with your legs, getting it in the truck/van is even easier.

Lifting the motorcycle front-first is harder because the rear end weighs about 30%. If you lift to steal a motorbike from the front, it’s like lifting an unconscious person from their leg because it’s harder.

While lifting the rear end, grab the passenger pegs and subframe, and raise the front end lastly.

Can a Thief lift the motorcycle if locked?

You can lift a 300+ lbs motorcycle with no muscle. Suppose you number two dudes, lifting a 300+ lbs is not the difficult part, but the awkward grip with 75% of the load borne in one hand and having to rotate your grip as the motorcycle gets higher.

Meanwhile, before the hit, you can practice lifting a motorcycle into the truck. If possible, practice with a similar motorcycle to steal.

Can a Thief Break in to Steal a Motorcycle?

Yes. However, you must wear a mask because of the cameras. Moreover, between 3 and 4 am is the best time to steal a motorcycle. Get a battery-powered Dremel or cutter to get through locks, but endeavor to handle the wires for hot wiring first.

Motorcycles have accessible starters that you can jump with a screwdriver; look around the seat. Using a battery-powered angle grinder might be faster. Rent a van, invite a partner, cut the lock, and dump the motorbike in the van.

Do not be careful not to scratch the motorcycle because it wastes time and every second count. Lastly, make sure to use fake plates on the truck because of cameras. Typically, if a motorcycle battery is dead, and a crook prefers riding the motorcycle, they’d jumpstart it with a their car.

Read: Can you sell your motorcycle with no title?

Do You Plan to Steal a Motorcycle?

If you intend to steal a motorcycle, you ought to be careful. Suppose you get caught, riders will not hesitate to accost and lay you out with any weapon at their disposal.

Typically, nobody calls the cop on a motorcycle theft. An ambulance gets the call first, and maybe you answer to the police later.

By the way, if you succeed eventually, endeavor to make the stolen motorcycle legal.

Moreover, know the weight of the bike you plan to hijack. If it’s heavy, a heavier motorcycle might be harder to ride, especially if you’re not muscular.

What do I do to keep my new motorcycle from being stolen?

If you are just scared that your motorcycle will be stolen after buying it, this section is for you.

Chain the motorcycle to something sturdy, and get a disc lock alarm. Whenever you park the motorbike, cover it so that thieves are not attracted to it.

Meanwhile, apart from chains, locks, and GPS tracker, a kill switch is important to disable the electric when your bike is stolen. Wire the ground to a hidden switch beneath the fuel tank to make it harder for a thief to get away with your motorcycle. Note that this practice does not deter thieves but hardens their hit.

Finally, get insurance, and be mindful of where you park your motorcycle.

Meanwhile, how do you avoid buying a stolen motorcycle? 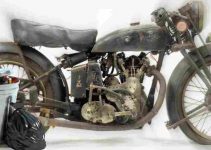 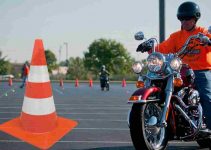 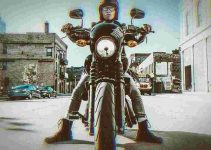